How updating our language may be vital to increasing our crowdfunding success.

(This article was first published in August 2020 and has been adapted from the original blogpost by Anita Gallagher with her permission.)

A few years ago, a small cartoon circulated showing donors on one side and an ATM machine on the other side, with the caption “Spot the Difference.” Hopefully we all know the difference, but do we really treat the people who support our work as more than just a source of money? And how does our understanding of this relationship affect our ability to carry out successful crowdfunding campaigns?

There’s a lot to dig into, especially in light of ongoing discussions on power relationships within philanthropy. However, as it is often the case, a good place to start is with the words we use and in particular, the word “donor”. 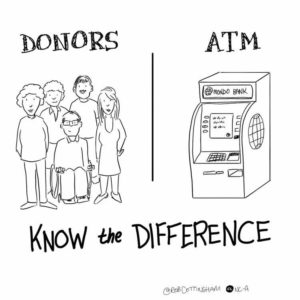 How can this seemingly simple choice of word affect the success of a crowdfunding campaign?

In a strict sense the term is entirely appropriate: a donor is simply a person that donates, a person that gifts resources of some kind to a charitable cause. Yet, the centrality of the term to our work in fundraising has meant that new connotations evolve, at the same time as the concept is hollowed out and loses meaning from overuse.

Too often, nowadays, the word “donor” implies a one-way relationship, a unidirectional flow of resources from the donor to the recipient. These designations are themselves problematic, the relationship between giver and beneficiary indicative of an underlying power relationship, implying “I give because I can, because I have resources that you don’t.” From here, it’s not a big leap to the 19th century philanthropists and donors who made (extracted) money in manifold ways and then glowed in moral largess when distributing it.

The problem with “donor”

The problem then, is that it connotes giving as transactional and hierarchical, concepts that are in complete contrast to the type of relationship that we should have with the people that support our work.

A growing body of work, notably from GivingTuesday, shows that people who like giving, like giving in multiple ways and seek a greater involvement with the cause. Amongst younger generations, especially, we see how pro-social behaviour and philanthropic empowerment grows not from owning a credit card but through engagement with a cause, both intellectually and emotionally, online and in the real world.

So, which word should we use?

At HIPGive, we’ve had numerous discussions regarding the role of crowdfunders and how best to encourage their ongoing participation with the causes they care about. “Supporter,” “funder,” and “contributor” all have many shades of meaning, but none quite encompass the full significance of the generous act of reaching into your pocket, getting out your credit card and sharing what you have, motivated because of your sense of solidarity or intent to make this world a better place. So we’ve decided to invite people to be Givers, or as we like to call it, HIPGivers.

However, the “right” answer is likely to be different for each organisation or movement. That’s why we encourage you and your team to talk about the words you use to describe giving and givers before embarking on your next crowdfunding campaign. These questions might help kick off the conversation: